Our Hall of Fame of Ferretti Yachts

When EKKA Yachts was founded, in the long 1984, a successful relationship was about to begin and last for almost four decades. For 37 years, EKKA Yachts was synonymous with Ferretti Yachts, especially when it came to the Greek and Cypriot markets.

Having inspected each and every Ferretti model that was produced during those years, our dedication was awarded with four Best Dealer awards, six Sales Performance awards, four awards for Customer Care & After-Sales Service, as well as the 30 year Honorary award in honour of the 30-year continuous and successful relationship with Ferretti Yachts. The experience we gained gave us a high level of expertise towards this historic brand but also cultivated our celebrated client service.

Based on our own taste and experiences through these decades, we would like to present our "Hall of Fame" models of Ferretti, starting from the 80s up until recent times. Here are the "cream of the crop" of this historic brand.

FERRETTI YACHTS ALTURA 46/49 - HOW IT ALL STARTED

The Altura 49, with the revolutionary for her era platform. 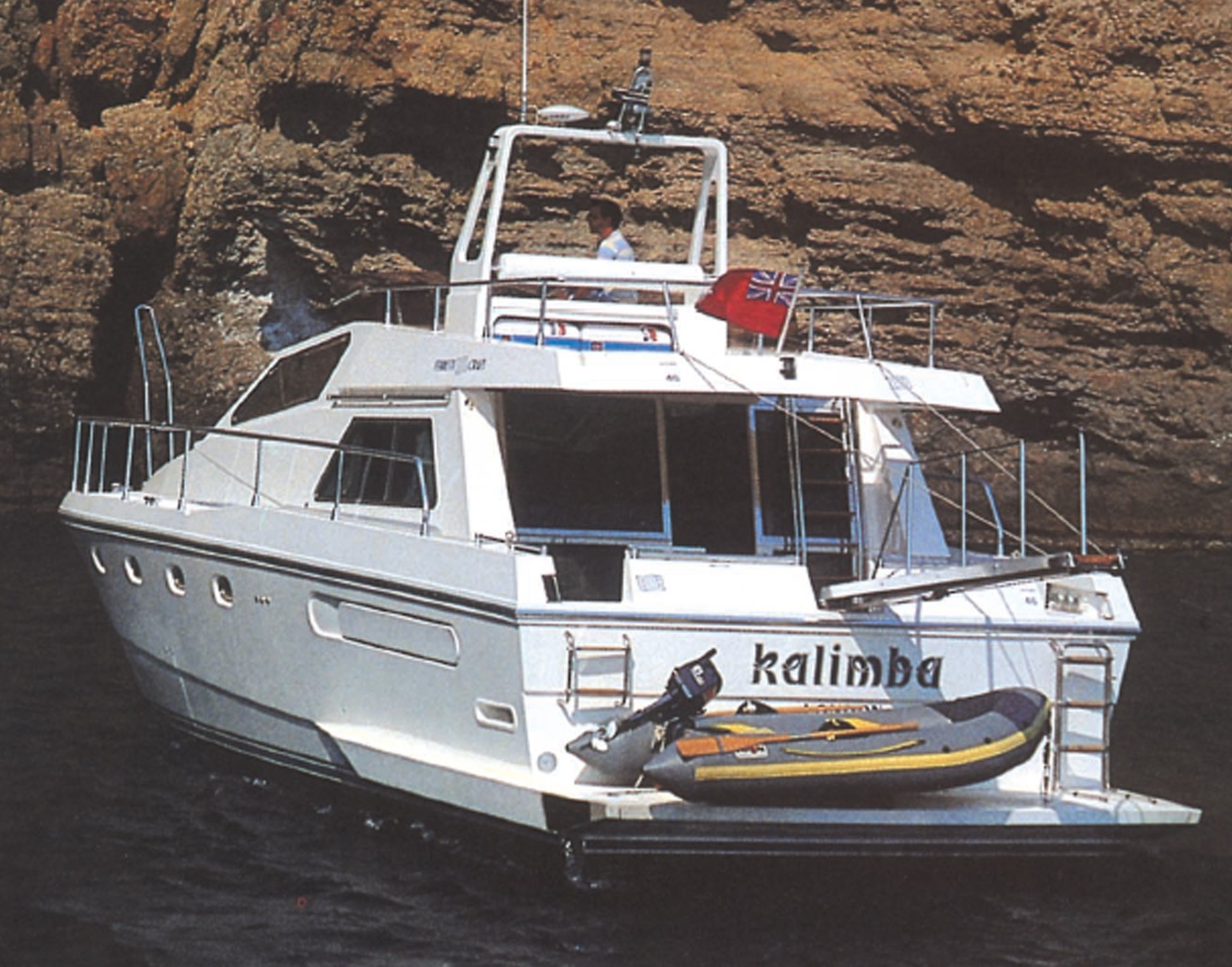 A yacht that was about to become a turning point in Ferretti Yacht's history and establish the brand in the motor yacht industry, as until that point the brand was only producing motor sailers. The Altura 46, that was later renamed to Altura 49 thanks to the platform that was attached to the boat's hull, making her 3 feet longer. A revolutionary idea for her era, as she was the first boat ever to use this kind of platform.

Amongst her many innovations was the material that was used for her construction: Aramat, a material that resulted in significant loss of total weight of the vessel. This had many collateral advantages, as the yacht could now be equipped with smaller engines without losing in performance. This means lower consumption as well as bigger interior spaces to use. Gradually, the competitor shipyards followed Ferretti's example.

In addition to that, Altura 46/49 was the first wide italian yacht produced and she was the first boat for which Ferretti hired a decorator for the interior spaces. Until then, the decoration of Ferretti Yachts was taking place in-house.

The interior of the Altura 49

The 54 is the first Ferretti Yacht designed by Zuccon International Project, as until then an in-house designer was used. The results were amazing, as the 54 is one of the best-sellers in the brand's history, if not the best one! The successful relationship between Ferretti and Zuccon lasts until today, a fact that reveals what a key decision that was.

The Ferretti Yachts 54, the first Ferretti designed by Zuccon.

The model was later renamed to Ferretti 175, but no major changes were made as the hull remained the same.

Following the 54/175, Ferretti 60 and Ferretti 620 were produced, with the 620 having a different superstructure, different side windows and being faster.

One of the most beautiful Ferretti's ever designed, the Ferretti 68 was first revealed in 1998 and was later renamed to 680, 681 and finally Ferretti 700 until the last hull was built in 2013.

The 68 and 681 models were the best sellers of the series. The Ferretti 68 was the first yacht to be designed by Norberto Ferretti, who also owned the hull number 1.

As to the 681, compared to the previous 680, the first impression is that she is a completely new yacht. Space, comfort and a completely contemporary design, the use of teak and a newly designed line, made her a perfect yacht for its size and optimization of space. The new style was clearly visible externally with a more aggressive and streamlined shape thanks to the widening of the covering windows which combine with the new spaces such as the aft folding bench offering an area for relaxing while remaining in contact with the sea.

Because of its weight and hull design, the 681 can handle relatively rough water and still go fairly fast. That means it is ideal for cruising the Greek isles or the Turkish coast, as well as lazing along the French Riviera.

“Living the sea”. These are the key words necessary to really understand the individuality of this yacht, which presents a revolutionary conception of space both inside and out. Beginning with the unusual layout that stands out due to its symmetrical perspective, to the dominating central beam inside the flying bridge.

The large master cabin takes advantage of the most important Ferretti innovations in terms of space and luminosity: with a large open view window on either side that allows a view of the sea from the ample bathroom equipped with a semi-circular shower and toilet, separated by a sliding door. The large salon with dining area has been designed to match the symmetrical layout of the yacht with a central TV cabinet, double access to the bow section and the central control station. The external layout allows for a generous salon area with an aft folding bench that offers the guests a comfortable sofa for living the sea in absolute tranquility.

Ferretti's 731 Interior, with the large open-view windows in the master cabin 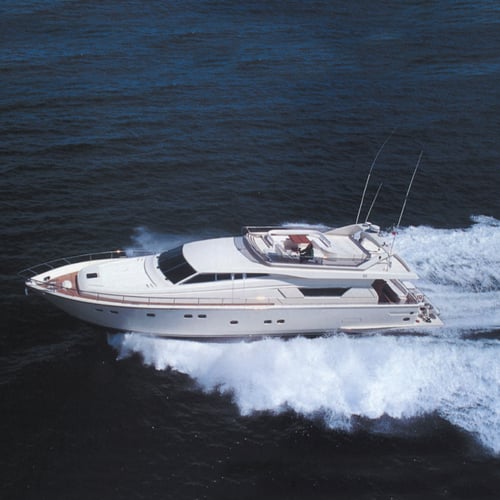 The 225 was a challenge for the shipyard, a challenge that needed to be won. It was the answer to the question if Ferretti could build a big yacht. And as always, Ferretti rose to the occasion and came up with a big thus sportive yacht, actually the most sportive yacht in its category.

Furthermore, it was the first yacht constructed in the inland, that could be transferred through the land, thanks to her removable fly bridge that made her capable of passing underneath bridges.

The 225 interior - her main salon and the master cabin 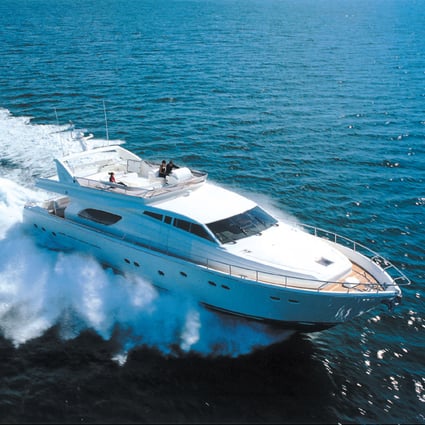 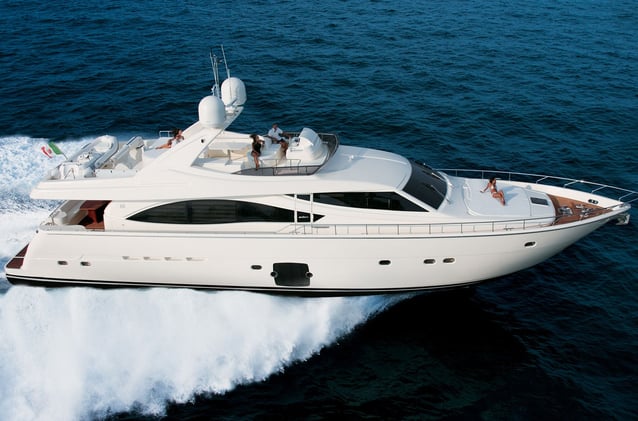 A turning point for the shipyard in terms of design and life on board, the Ferretti 830 ensures a completely unique view of the sea both from the bed, now facing the window for the first time, and from the bathroom, with two communicating sections.

The master cabin with the huge windows and the bed, facing the sea. 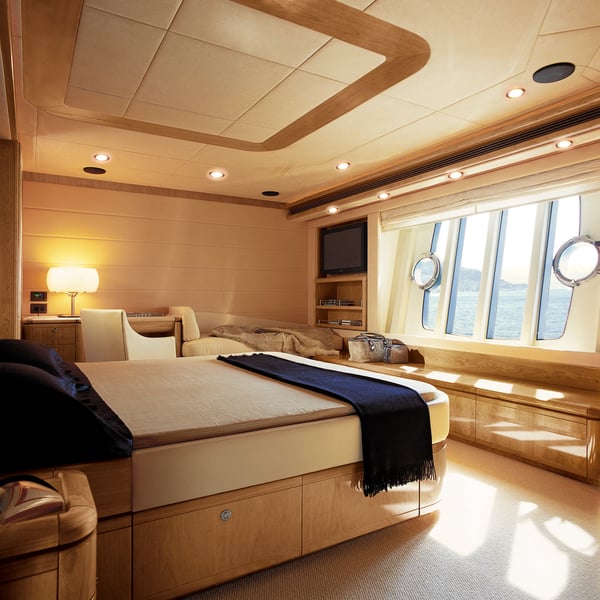 The slender contours of the fly bridge are due to the unusual positioning of the roll bar towards the bow, which gives a valuable advantage creating an area of shade over the sofa during the hottest hours. The layout of the navigation bridge has also been reassessed and unites practicality and aesthetics in a pleasingly cozy way. Inside, the Ferretti style is immediately obvious with rich paneling in polished cherry-wood and extremely detailed fittings. Apart from the ample master cabin there are also two guest cabins and one VIP cabin with a double bed, all with en suite bathroom and shower. 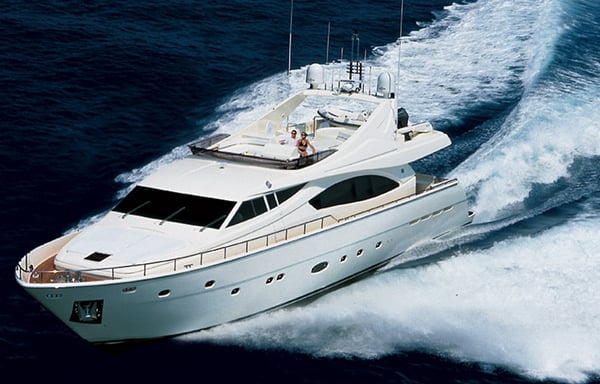 With the Ferretti 880, Ferretti has made its official debut in the luxury superyacht sector, thanks to the newly established shipyard in Cattolica, which gave the brand the potential to build bigger yachts in terms of width and height. It was designed for those who wish to cruise in top-of-the-range style, without forsaking that feeling of intimacy, typical of Ferretti Yachts. The 880 was designed to maintain the house characteristics, and it has simple, dynamic and sophisticated lines.

The exceptional design work performed by the Zuccon International studio and Ferretti Engineering is particularly obvious on the flybridge, which represents a combination of styling and spacious luxury. It is an invitation to enjoy sun and sea in conditions of total relaxation. Everything is incredibly detailed, exclusive and comfortable, such as the whirlpool tub, the cocktail bar, the settees and the sundeck. She was a yacht easily compared to the Posillipo 95 in terms of spaces, even though she was significantly smaller!

The Ferretti 881, follows the huge success of the 880. Designed with those who wish to cruise in luxury without giving up the atmosphere synonymous with a double F yacht in mind, and planned according to the most rigorous Ferretti family feeling. The 881 is characterized by an innovative use of space, the design is once again by Studio Zuccon International Project and the Ferretti Group Engineering Division.

This impressive dedication to design has allowed for the inclusion of two large open view windows in the master cabin, increasing the space available for the bathroom and gaining an incomparable spaciousness and luminosity. The bed of the master cabin was facing the sea, after the success that this feature met in the 830 model. Great care has been taken to ensure the maximization of the external spaces: from the jacuzzi on the fly bridge to the cockpit which boasts a teak table suitable for eight people to enjoy the sea while relaxing. The generous salon with leather sofas and an ample central table reveals design and practicality. The other three cabins can accommodate six guests in maximum comfort and privacy; each with its own bathroom.

The flagship of the fleet. The largest planing pleasure boat that Ferretti Yachts has made to date. 96 feet of sporty lines, best-in-class performance and supreme levels of amenity.

Our last Hall of Famer is the majestic Ferretti 960. She entered production in 2012 and has not stopped yet, a fact that reveals the success that this model brought to the brand, with 21 boats sold until today. 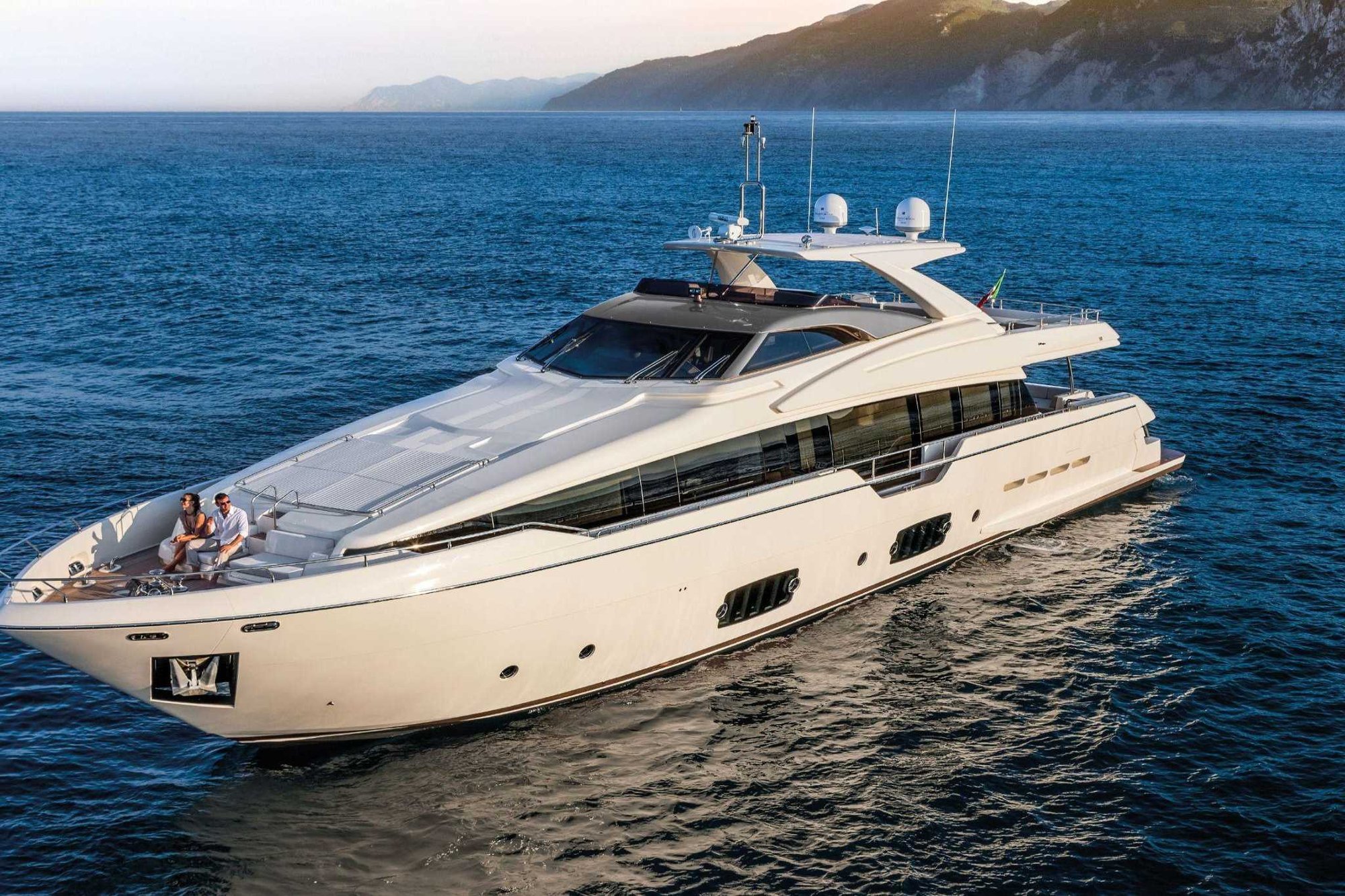 Breakthrough design - In 29.20 metres of overall length (with a hull length of 23.97) she can be manoeuvred like a pleasure craft, even in absence of a professional captain.

She is the brand’s first vessel with a master cabin on the main deck and four below, all generously proportioned and with premier fittings and décor. 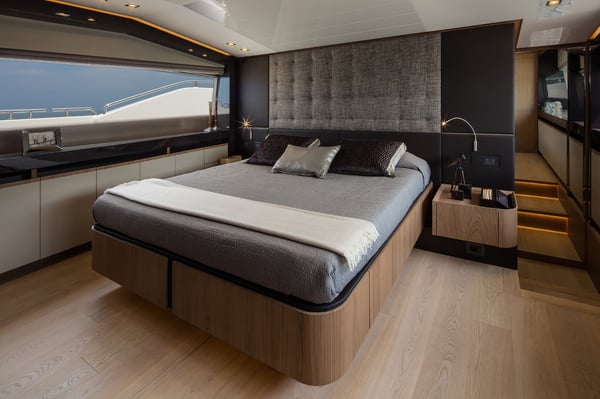 Her performance is one of her standout features as she is one of the fastest RPH (Raised Pilot House) motor yachts of her size, being able to reach speeds up to 30 knots.

The flybridge and stern area are a haven of leisure. When closed, the garage door offers a trio of cushioned sun pads, while the swim platform features a convenient mobile section that makes short work of launching and hauling out the tender. Intimacy with the sea is always assured, even on the flagship. 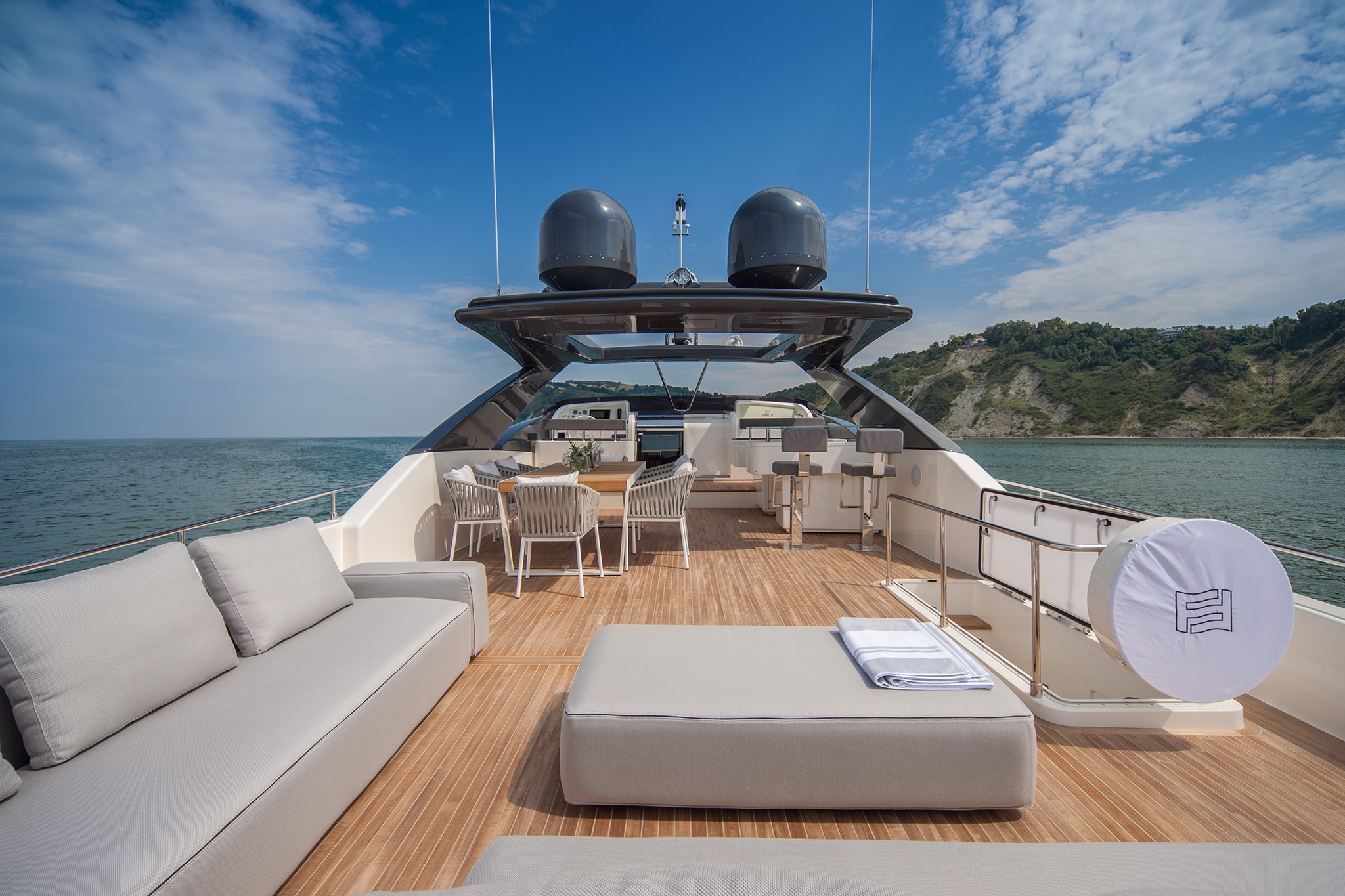 We hope you enjoyed our small journey into Ferretti's history! We would love to hear your comments, about unforgettable experiences you may have had on board a Ferretti Yacht, and of course your own suggestions for additional models to be included in the list!