Treasures of Sea and Land

Perhaps archeology isn’t the first thing that comes to mind when considering a yacht holiday, be it on your own yacht or when chartering one. Yachting in Greece, however, presents the perfect opportunity to visit some exceptional archeological locations, and to experience some of the oldest wonders in the world. Greek mythology and ancient history become intertwined in such places, bestowing them a distinct type of enchantment.

SAIL INTO THE PAST

In our latest edition of the Yachtsman Report you will find some of the most important Greek archeological sites that are easily approachable and accessible while journeying on a yacht. They are a wonderful digression from your typical holiday agenda, so do let your captain know that you wish to travel to the past, and he will point you in the right direction.

Sample itinerary - duration and consumption based on a hypothetical journey onboard m/y Milos at Sea. 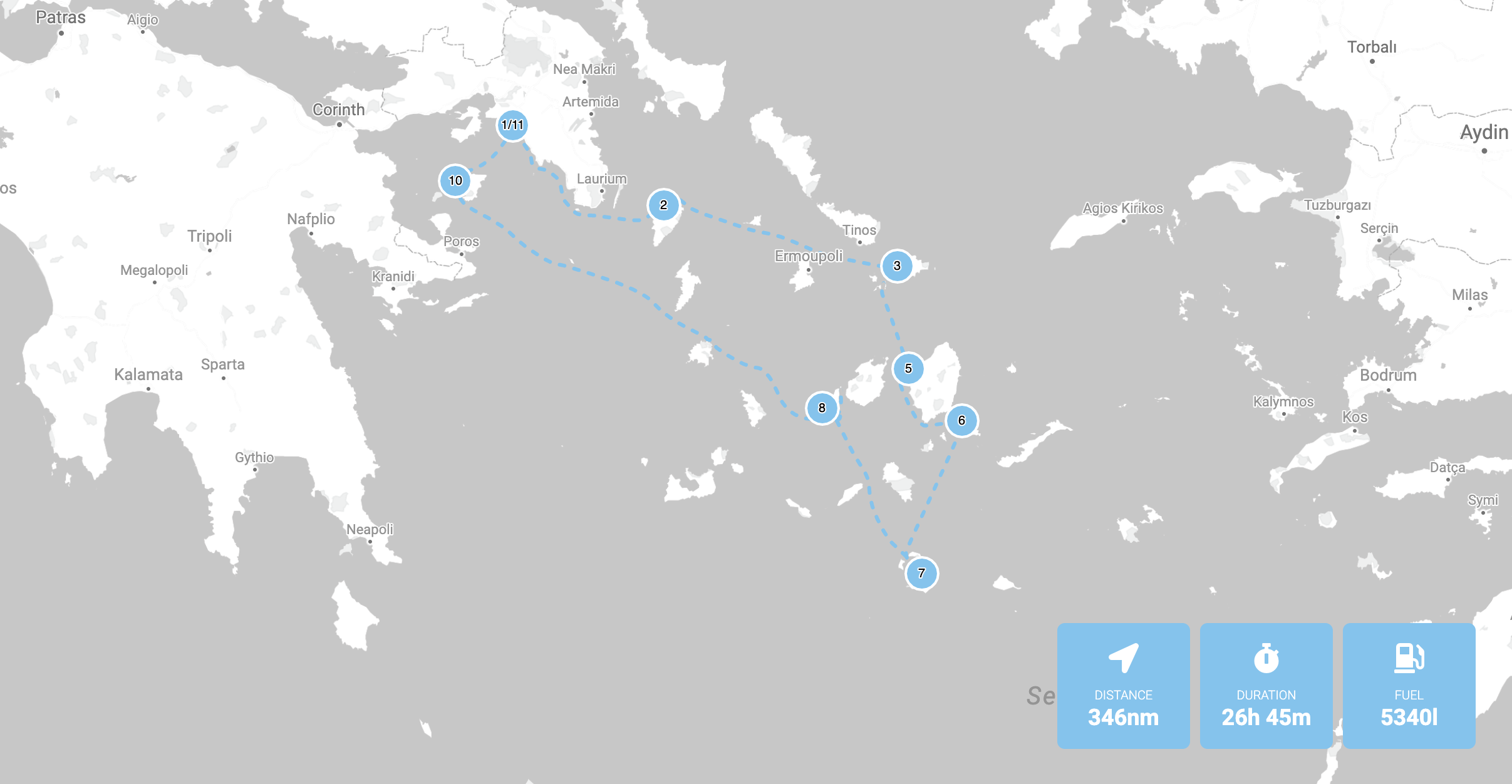 Close to Athens, on the island of Tzia (whose old name, “Kea”, derives from Keos, leader of the Locrian settlers occupying the island in ancient times), you will find the Ancient Karthaia site. Karthaia, one of the four ancient cities of Kea, was founded in the 8th century BC and survived until the early Byzantine period. It was celebrated for its grand architecture, its fortifications, as well as its silver coins, indicating a flourishing, bustling city. Its acropolis was surrounded by walls from both archaic and classical times, with at least six entrances and an extensive defense mechanism including several towers. It contained public buildings and temples, laboratories, mines, water supply systems, a theatre and a cemetery, and there is ample archeological evidence of cultural and artistic activity. The city also boasted autonomy, including its own laws.

Some of the most interesting surviving monuments in Karthaia include the Doric temple of goddess Athena (late 6th century BC), the archaic Temple of Pythion Apollo (530 BC) and the theatre on the south slope of the hill (1st century BC).

The island of Mykonos, legendary for its stunning waters and vibrant nightlife, is one of the premier yachting destinations on the planet. It also holds a significant place in Greek mythology, having served as a battleground for Zeus’ clash with the Titans; it was also said to be named after Apollo’s grandson. 1.5 nautical miles from Mykonos is one of the gems of Greek ancient history, the island of Delos; next to it, Rineia (“Big Delos”) complements the story of this extraordinary archaeological location. The Terrace of the Lions, island of Delos - Source: link

Delos, a UNESCO World Heritage Site, was first excavated in 1872. It was discovered early on that it was a sacred place for ancient Greeks, and the dense group of islands at the centre of the Aegean Sea, the Cyclades (Kyklades) appeared to form a notional circle (kyklos) around it. In Greek mythology and ancient history (as these are always interwoven in some manner) the island is where the twin gods Apollo and Artemis were born, and the Apollo temple built there attracted pilgrims from many places. It also served as a thriving, cosmopolitan trading port and as the treasury of the Delian League (the Athenian Alliance) in the 5th century BC. What endures today is part of the Apollo sanctuary and remains of the city that developed around it. The most notable things to see are: the Sacred Way, the Terrace of the Lions, the House of Cleopatra (not the Egyptian queen), the House of Dionysus (with its marvelous floor mosaics), the Sacred Precinct and the Heraion (Temple of Hera).

Next to Delos, Rineia, although larger, always played second fiddle to its neighbor. Also dedicated to the Delian Apollo, its southern half served as the Delos necropolis and a ground for clinics and sanatoriums, as it was unlawful for any living being to be born or die on Delos. It was inhabited during the 5th century BC and there are ruins of an ancient temple and a 2,000-year-old Christian church. It’s currently used by Mykonos residents for the purpose of grazing animals. 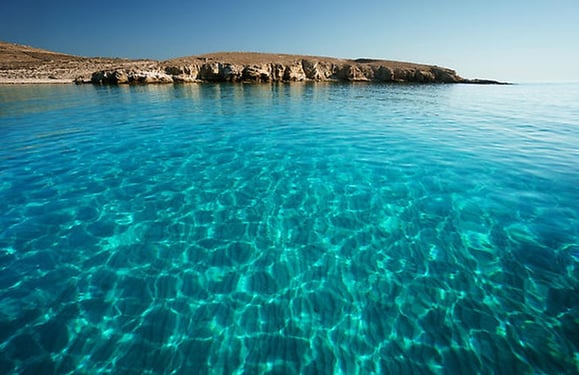 Naxos, the biggest of the Cyclades island complex, occupies an illustrious place in Greek mythology. Amongst the many stories connected to it, it’s credited as the place where Zeus, God of Gods, grew up, and where Dionysus, one of Zeus’ most famous children, was brought up by nymphs. The island’s fertile soil and grape cultivation were said to be a direct result of Dionysus’ love for the place.

When approaching the Naxos harbor, you will be greeted by the unique, colossal monument of Portara on the islet of Palatia (or “Bacchus island”), connected to Naxos by land. Its name originates from the Greek word “porta” (“door”) and it’s a marble gateway of monumental proportions: 6m high and 3.5m wide, it consists of separate monoliths weighing about 20 tons each. 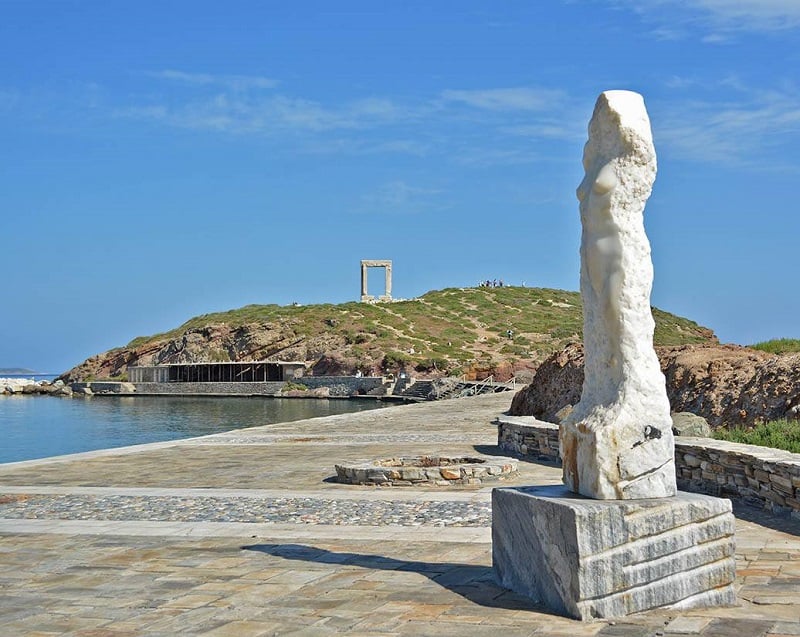 The Ariadne statue and The Portara, the lintel of Lygdamis' Temple of Apollo at Naxos, in the distance - Source: link

Portara was built during the 6th century BC by Lygdamis, the island’s ruler, who ordered the construction of a massive temple of the Ionic architecture style. When war broke out between Naxos and Samos, the work stopped and was never completed. Additionally, in Greek mythology, the islet of Palatia was where Ariadne, the Minoan princess, was abandoned by her lover Theseus after he killed the Minotaur.

Keros is 2 nautical miles south of Koufonissi and in ancient times it was called Keria, the first mention of its name occurring in 425 BC. A small island full of beautiful marble, it was the site of a major Bronze Age settlement on the neighboring islet of Daskalio, built, pyramid-like, on terraces at the island’s highest point. The settlement, abandoned around 2200 BC, boasted impressive buildings (constructed with Naxian stone), metallurgical workshops and complex systems of water transport, as well as other signs of an advanced civilization. During the Middle Ages Keros was used as a pirate stronghold and until 1952 it was the property of the monastery of Panagia Chozoviotissa of Amorgos.

Keros’ most famous archaeological finds, dating from the era of the Cycladic civilization, are its marble Cycladic figurines, connected to various ancient rituals. These include the famous harpist and flutist exhibited at the National Archaeological Museum in Athens. 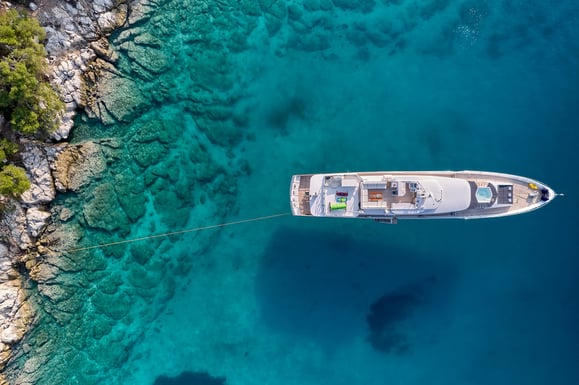 Also on the most famous Greek islands list, Santorini has a rich heritage and history. Its pre-historic cities were superbly advanced and there are three major archeological sites that attest to their intricacy and grandeur: the late Minoan city of Akrotiri, Ancient Thira (or Thera) and the islet of Thirassia.

In Greek mythology, Santorini was created for the love of a woman. After the Argonaut expedition, Jason’s crew stopped on Anafi, a small neighboring island. A man called Euphemus dreamt he was making love to a nymph. She got pregnant with his child and pleaded with him to hide her, so he pulled a piece of soil from Anafi and threw it into the sea. When their son was born, he was named Thiras, and he bequeathed his name to ancient Santorini, as well as its volcano.

The island was first settled around 3000 BC and became an important urban center and Aegean port. The city of Akrotiri boasted various sophistications, such as drainage systems, beautifully decorated multi-storey edifices (color frescos can be seen today), conveniences such as hot water and indoor toilets. In the 17th century BC the town and island were obliterated by earthquakes and volcanic eruptions, thus creating the famous Caldera; Akrotiri is also sometimes called “the Greek Pompei”. Within a few days, about 90 billion tons of molten rock were ejected and a massive tsunami slammed the northeastern coast of Crete. The island was abandoned for centuries after its destruction. In 1870 the French archaeologists H. Gorgeix and H. Mamet began the first excavations and in 1967 a Greek team with Professor Marinatos discovered the Late Minoan City of Akrotiri. Excavations continue to this day.

Ancient Thira was inhabited from the 8th century BC until 726 AD. It consisted of a street almost 800 m long and especially wide for its time, containing imposing buildings made with local limestone. It was built in a strategic location, and, throughout the various stages of its occupancy, it was inhabited by Spartans, Ptolemies, as well as Egyptians. Residential areas were grouped around an Agora and there was a small sacred area with temple grounds and public facilities. Finally, on the islet of Thirassia, archeologists have discovered buildings and remnants of settlement fortifications from the Early and Middle Bronze Ages (3200 BC-1600 BC), as well as fragments of large, colorful vessels, obsidian tools, traces of weaving and spinning.

The tiny island of Antiparos, one nautical mile from Paros, is both a calm haven and a cosmopolitan gathering point. Known by the name Oliaros in antiquity, it took its later name from one of the 50 sons of Egypt. West of Antiparos and east of the smaller island of Strongyli, one can visit the islet of Despotiko, another archeological jewel of the Cyclades.

On the islet, there is a large 6th century temple dedicated to three Olympian gods: Apollo, his sister Artemis, and Hestia; there are also other ceremonial and auxiliary buildings such as the “hestiatoreion” (banquet hall). The temple held great significance (perhaps on par with the Delos temple) and is mentioned in writings by Pliny the Elder and Strabo, who called the islet “Prepesinthos” (an alternate name is Episkopi).

Among the Despotiko finds are tombs, remains and architectural members (capitals, triglyphs, etc.) from houses and other buildings, an altar of the Classical period dedicated to Hestia Isthmia, clay figurines, alabaster, cotyles, aryballos flasks, etc. Engravings from the 15th and 17th centuries indicate the existence of a castle at the location of Mantra, and findings dating back to the Middle Ages attest to the island's habitation during this period too. 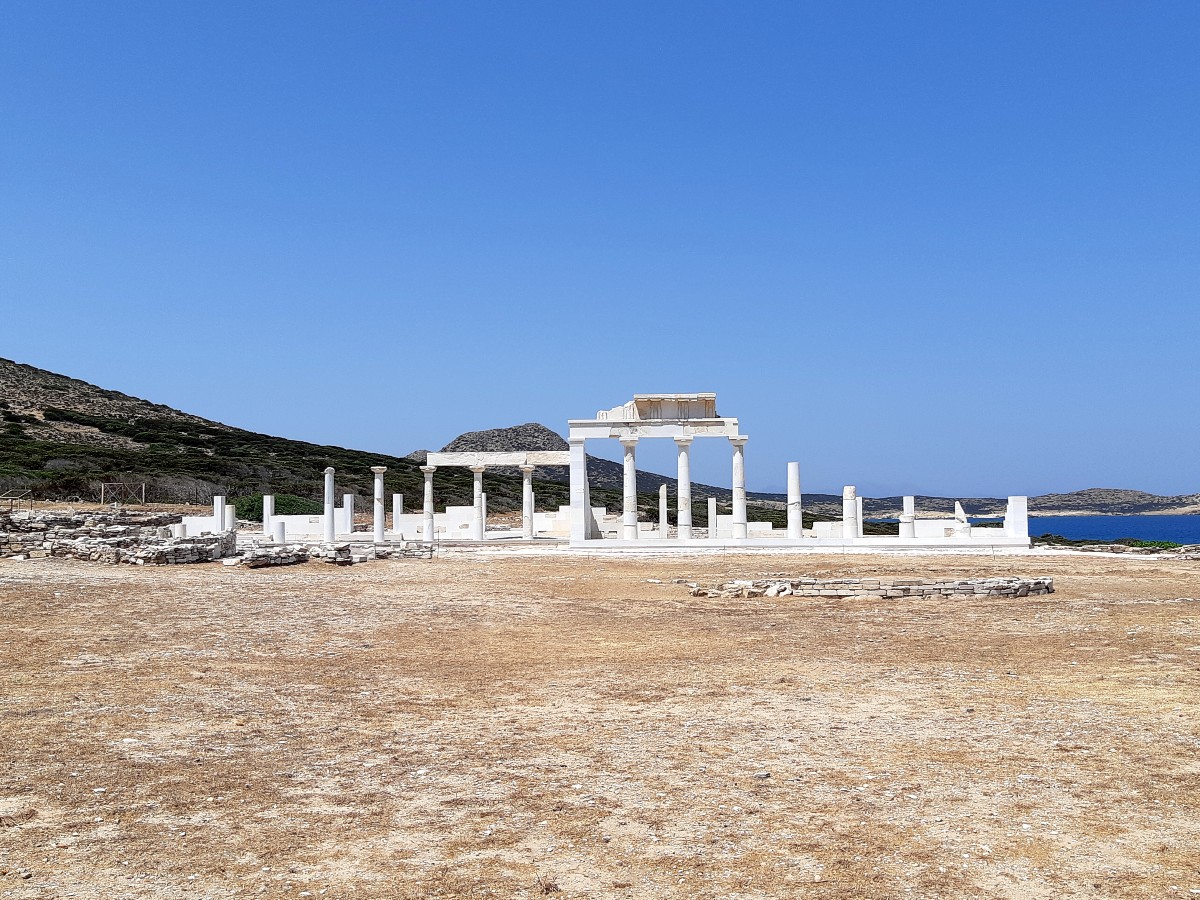 The charming Aegina, just a short trip from Athens, was, according to Greek mythology, a Naiad nymph abducted by Zeus and the mother of Aiakos, king of the island. Its most important archeological site (and one of the most remarkable in Greece) is the Temple of Aphaia. Standing on a green hill, it is part of a magnificent mystery, the theory of geodetic triangulation in the ancient Greek world. According to this (unproven) mystical and mathematical theory, the location of temples was not accidental, but created geometric formations. Various such sites form equilateral and isosceles triangles, such as the Temple of Poseidon in Sounio with the Temple of Aphaia and the Temple of Hephaestus in Thissio. 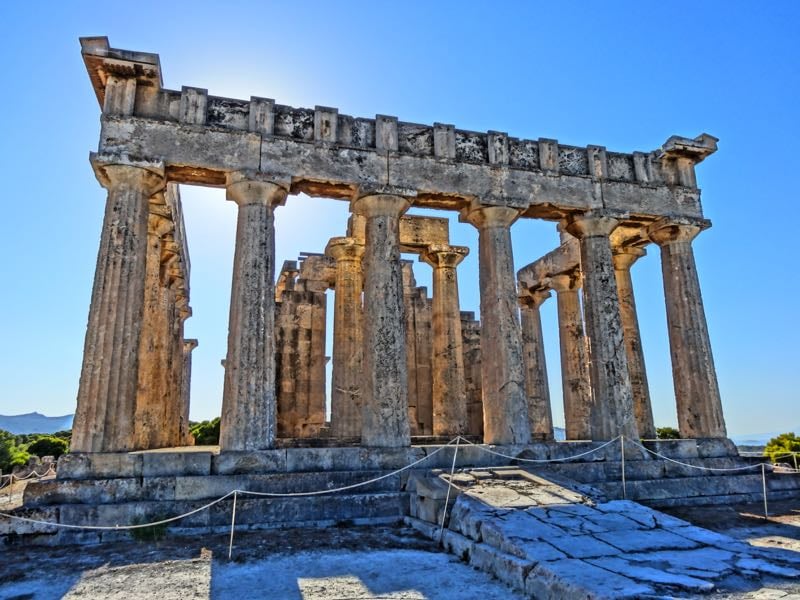 The temple of Aphaea in Aegina - Source: link

The excellently preserved temple, constructed in a Doric, peripteral hexastyle, is located within a sanctuary complex dedicated to the goddess Aphaia, a Cretan deity; it was formerly known as the Temple of Jupiter Panhellenius. The temple that we see today, constructed between 500 and 490 BC, stands on an even older sanctuary that was destroyed in a fire. Scenes and Aeginian and other heroes from Greek lore were depicted all over the temple. Pottery from various periods indicates activity on the site until the beginning of the 1st century B.C., when the sanctuary started decaying.